Microsoft released two versions of the Windows 2000 SP4 Update Rollup 1 package, one which can cause machines using SCSI to blue screen on reboot, and one which doesn’t.

Unfortunately they didn’t provide any easy way to tell the difference (like a version number on the installation executable). If you’re converting a machine to run with SCSI (or virtualizing it as I am), you need to know which version is installed.

If you boot the system with a SCSI device using the BROKEN version it will blue screen.

You can fix it by copying back “scsiport.sys” from \WINNT\$ntupdaterolluppackuninstall$ to \WINNT\SYSTEM32\drivers while in the Recovery Console or WinPE. Then install the newer version of the Rollup which can be obtained from Microsoft. 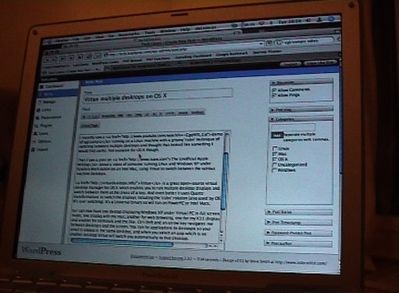 I’ve found one of the most useful add-ons for my Powerbook.
At work, I’m commonly juggling between Virtual PC, Microsoft Remote Desktop, my mail, a web browser, and maybe an X11 connection to my Linux machine at home.

On a 12″ screen with a resolution of 1024×768 pixels that’s a lot to get in a little space so I’d end up constantly minimising applications and switching windows.

I recently saw a demo of xgl/compiz running on a Linux machine with a groovy ‘cube’ technique of switching between multiple desktops and thought that looked like something I would find useful. Not available for OS X though.

Then I saw a post on The Unofficial Apple Weblog about a video of someone running Linux and Windows XP under Parallels Workstation on an Intel Mac, using Virtue to switch between the various machine desktops.

Virtue is a great open-source virtual desktop manager for OS X which enables you to run multiple desktop displays and switch between them at the press of a key. And even better it uses Quartz transformations to switch the displays including the ‘cube’ rotation (also used by OS X’s user switching). It’s a Universal binary so will run on PowerPC or Intel Macs.

So I can now have one destop displaying Windows XP under Virtual PC in full screen mode, one display with my mail, another for web browsing, one for my X11 display and another for terminals and the like. Ctrl-Shift and an arrow key navigates me between desktops and the screen. You can tie applications to desktops so your email is always in the same desktop, and when you select an app whcih is on another desktop Virtue will switch you automatically to that desktop.

It’s very neat, and I’ve made a short video file of Virtue in action. It’s a Quicktime .MOV file, about 800k in size.